Escalator Kings are back again for the third year running! They must be doing something right (or paying the right people)…

Escalator Kings are a four-piece 'band' from Farnsfield, Southwell and Newark. They are aged between fairly young and not too old and enjoy long walks in the park and good food with friends. They have varying amounts of hair.

Previous performances have been generally non-fatal and most people leave with only mild trauma. Reduced-price t-shirts are available to audience members who find that they are unable to leave after listening to Escalator Kings for longer than the recommended safe limit of twelve seconds.

"Great for your health, this is the only band that has actually made me fitter! I run as fast as I can in the opposite direction whenever I hear them."
- Mrs Hilda Longbottom, Didbury

The Escalator Kings sound is often described as a cross between Bruce Springsteen being eaten by a dishwasher and a blues orchestra falling out of a thirty-storey window. Expect to hear some wonderful, professionally-performed music both before and after the Escalator Kings' set.

Help and support for audience members is available from the Beer tent. You are advised to provide your own earplugs. Festival management discourages the digging of escape tunnels or fallout shelters in the school field. 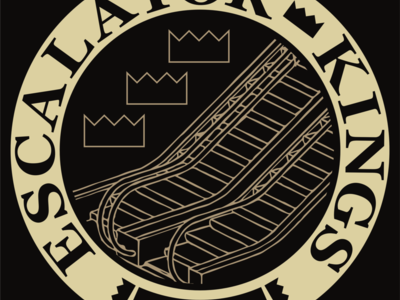