Winner of The Gate To Southwell Folk Festival's 2016 open mic competition, Paul has recently played gigs to capacity crowds at The Robin Hood Folk Club in Long Eaton and The Carrington Triangle Folk Club in Carrington (Triangle), on evenings which have been described as both "Saturday" and "Wednesday".

The Midlands magazine "Folk Monthly" labelled him "bourgeoning", back in the days before spell-check (2015).

In a recent interview with a lady who said she was from off of the telly, Paul deftly cleared up once and for all any mystery surrounding his chosen musical genre. "Some call it folk-punk," he explained, "while others call it punk-folk. Either is acceptable. But over-blend it and you’ll end up with funk or polk, and I’m sure none of us wants that. It’s rather like mixing the grape and the grain... you’ve got to be careful not to end up with muesli." 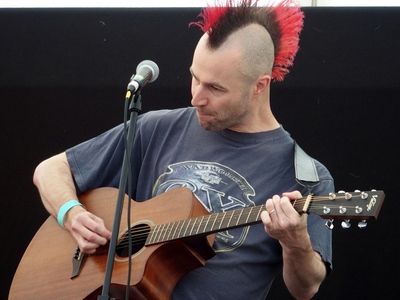